The Cult of Saint László (Saint Ladislaus) in the Hungarian Army

Every July, in Letkés and Ipolyszalka (Slovakia), the St. László Division of the Comrade Union of Hungarian Parachutists commemorates – related to the King St. László festivals – Hungarian soldiers who served in the Division in the last months of WWII. The Division had nothing to do with the Waffen-SS nor with the armed corps of the Hungarist Movement. It was a part of the Royal Hungarian Defence Forces, which still kept some elements of old traditions. King László, compared to other supporter or branch patron saints, was a decisive hero to Hungarian soldiers until WWII and the establishment of the Soviet type bolshevik regime in Hungary. Although after the regime change, St. László was again recognised as ‘the patron saint of riflemen’, and from time to time he is commemorated with a mass or a concert, his influence remains far behind the period before WWII. In this study we are trying to get answers, why the cult of St. László – and other branch patron saints – has not developed in the Hungarian Defence Forces since the change of the political system, although the legislative environment makes it possible. We would like to reveal those deeper historical and intellectual historical reasons that prove that not only leftist ideology, and its extreme Bolshevik form, but also the ideology of liberal democracy cannot identify with St. László’s – and other patron saints’ – figure. We are pointing out that in the current ideological milieu, there are insufficient grounds for the branch patron saints, besides ceremonial activities, to become an awareness-raising power. It is not a judgement, but a hypothesis which is formulated so that we can reflect on the phenomenon authentically. We can say that the democratic legislation has reached its maximum with allowing religious freedom in the Hungarian Defence Forces. As numerous works have been written about St. László’s life and cult, his role in tradition and arts, we touch upon this when it serves to prove the assumption. 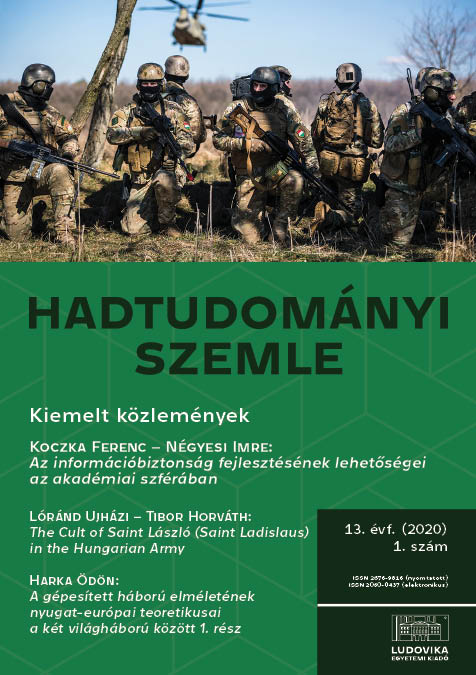